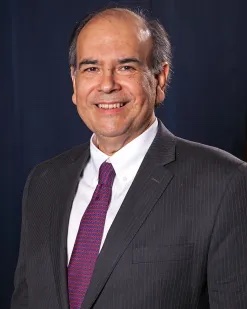 He is a past gubernatorial appointee to the Texas Optometry Board, where he chaired the Licensing and Administration Committee, and is a charter member of Optometry Cares – The AOA Foundation. He is a lifetime member of The University of Texas (UT) System Chancellor’s Executive Committee and the UT Austin Development Board, and he is a member of the UT Longhorn Foundation Athletic Advisory Council.

Dr. Farias is a past recipient of the Outstanding Young Texas Exes Award from The University of Texas at Austin, and in 2017, he was the recipient of the Lifetime Achievement Distinguished Alumnus Award from the Southern College of Optometry. In 2019, Dr. Farias was named and Outstanding Alumnus by The University of Texas at Austin’s Moody College of Communication.

Additionally, Dr. Farias is active in the McAllen community, serving as chairman of the McAllen Chamber of Commerce Government Affairs Council; volunteering for InfantSEE, a no-cost public health program to provide professional eye care to infants nationwide; and organizing and sponsoring vision screenings throughout south Texas. He has served on many local and statewide boards, including the Vannie E. Cook Cancer Center, the Rio Grande Valley Arthritis Foundation, and the Museum of South Texas History.

Dr. Farias received a Bachelor of Science from The University of Texas at Austin, a master’s degree from Harvard Medical School, and a Doctor of Optometry from Southern College of Optometry.